I honestly have to say that this is a film that truly put a smile on my face.

To some, the idea of a homeless addict's life being turned around by a streetcat might seem a bit far fetched. However, I was not at all surprised that this was based on a true story since it reminded me of something I had witnessed many years ago.

Back in the late 80s when I was in high school, I remember encountering numerous panhandlers around downtown Montreal, some sober, many drunk or stoned. There was one in particular who would beg on Ste Catherine, usually somewhere between Peel and Guy. He was usually sloshed out of his mind and extremely annoying.

After having been out of town all summer, I started CEGEP at Marianopolis and began spending more time downtown. I saw the above-mentioned fellow that first semester, but this time something was different.... he was sober -- completely lucid. Sitting with him was a beautiful cat. My friends and I stopped, pet the cat and listened to the man explain his newly found sobriety.

During one of his quests to score some more booze, he had found this cat who was injured. He became so worried about the animal, that he forgot all about the drink he had wanted.

I do not remember the man's name, but I never forgot his story, or the name of his cat: Magic.

Throughout the first half of the 1990s, I would frequently encounter Magic and his human companion. Sometimes I would bring Magic some cat-food and a cup of coffee or sandwich for the man.

I left Montreal in 1996 and do not know whatever happened to the man and Magic. But I was reminded of them after watching this lovely film, which was also based on a true story.

Watch it -- it will surely make you smile too.

Roba asked this question... unlike her, I have nothing against rituals.
Anyone who knows me also knows that I consume huge amounts of coffee. Here's my coffee ritual (which varies slightly from day to day):
Workdays:
5:30am - get up, put 8 heaping scoops of Brazil coffee house blend into filter + 7 cups of water, turn on machine, go do some yoga
5:50am- pour cup of coffee, add a touch of milk so it looks like mud (no sugar or any other sweetener), drink coffee while packing stuff up for work and Katja's daycare
6:15am - wake up Katja and give her breakfast, pour my second cup of coffee and drink while getting dressed
Since I start work a tad later on Mondays and Tuesdays, after dropping Katja off at daycare, I usually go to Cups & Kilos and get a latte (to go) (at around 7:40am).
If I am lucky enough to have a break during the day, I either a) get a latte at R'n'B, b) get a latte at Café des Artistes or c) in the office--> two teaspoons of Nescafe & two teaspoons of CoffeeMate.

Weekends: same coffee I make workday mornings, but bottomless cup for as long as I am at home :)
Posted by Betqa at 9:11 PM 4 comments:

I wasn't sure how it would go... The flight from Amman to Montreal takes 12 hours, which can even be rough on most adults. She was great! She slept for about 8 hours; while she was awake she was in such a great mood. She only cried a bit while the plane was descending to land, since the pressure was a bit much for her little ears to handle. People kept coming up to me and saying what a great baby she is. Even the cabin crew was crazy about her :) 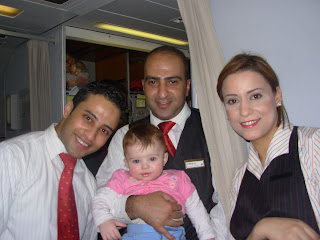 Katja with the Royal Jordanian flight attendants
Posted by Betqa at 3:55 AM 2 comments: